Hot off the ESID press: “Public sector reform in Africa: Understanding the paths and politics of change”, ESID Briefing 28, Deceber 2017.

This briefing explores why some states in Africa seem to be stuck in a spiral of corruption and institutional weakness, while others build effective bureaucracies that are able and willing to tackle the challenges of development. Drawing on research from ESID’s PSR project, it compares the public sector reforms of Ghana, Uganda and Rwanda during the period 2000-15. The three countries exhibit different kinds of political settlement, which makes for a useful comparison of how national-level politics filters the diffusion of transnational norms. This helps to build a more nuanced understanding of the varieties of state-building in Africa, and provides some policy implications for reformers.

Understanding these paths requires a theoretical framework that highlights the contested nature of the PSR policy domain, the effect of political settlements on elite time horizons, and the ideational fit between transnational policy ideas and elite ideologies.

Lessons for reformers and donors:

ESID has just released my new working paper on comparative PSR in Ghana, Uganda, and Rwanda: “Varieties of state-building in Africa: Elites, ideas and the politics of public sector reform“.

Why do some states in Africa seem to be stuck in a spiral of corruption and institutional weakness? Why do others somehow build effective bureaucracies that are able and willing to tackle the challenges of development? The public sector remains the inescapable anchor of development, whether for good or ill, but our understanding of the politics of public sector reform remains shackled by concepts that do not allow for variation or change over time. This paper presents a theoretical framework for understanding variations in public sector reform (PSR): centring the analysis on the intersection of power relations and ideas, the paper shows how the stability of a country’s elite settlement and the coherence of its developmental ideology interact with reform ideas in the PSR policy domain. This framework is explored through a structured-focused comparison of reform experiences in three Sub-Saharan African countries with different elite settlements: competitive Ghana; weakly dominant Uganda; and dominant Rwanda. In Ghana, where successive regimes have focused on political control for partisan purposes, it has been quick reforms compatible with top-down control that have achieved political traction. In Uganda, high-visibility reforms were introduced to secure donor funding, as long as they did not threaten the ruling coalition’s power. In Rwanda, lastly, the regime has fostered and protected various public sector reforms because it envisioned them as instruments for domestic legitimation as constituent elements of an impartial developmental state. In combination, policy domain, elite time horizons, and ideational fit allow us to move beyond blanket statements about isomorphic mimicry or neopatrimonialism, and towards a more nuanced understanding of the varieties of state-building in Africa.

Day 1 of fieldwork in Kampala. Government-owned New Vision daily, page 4, manages to get everything wrong about police reform, church-state relations, and – I would argue – even Christianity itself: 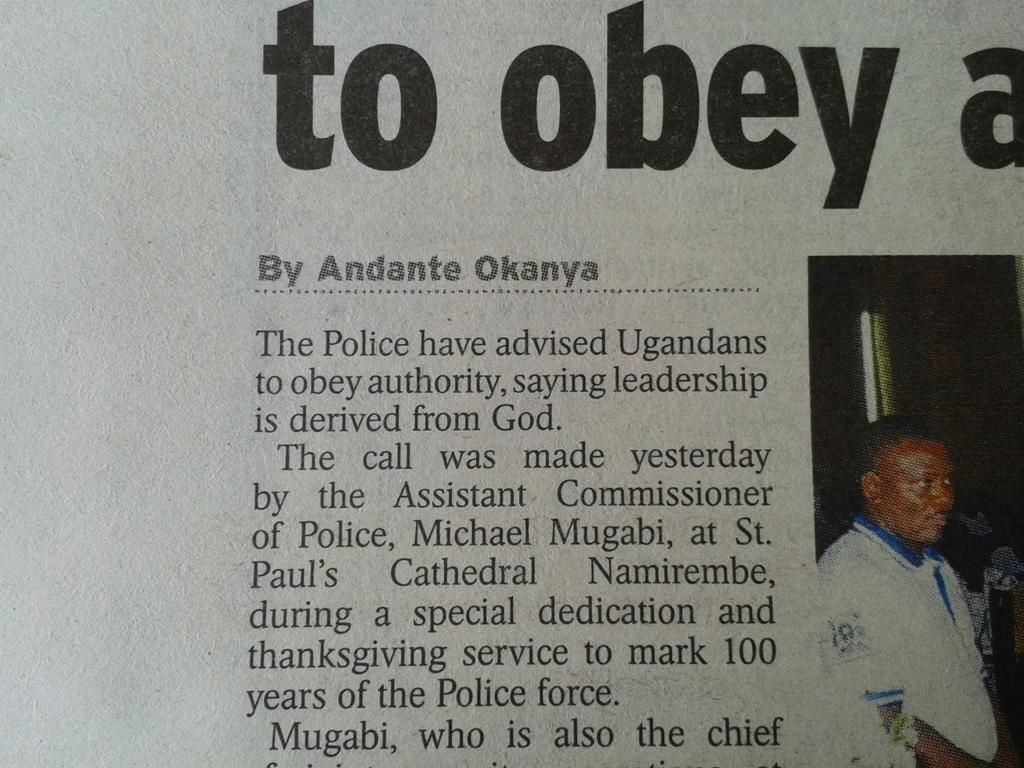