The fact that I have written a grand total of 7 posts for my own blog in the entirety of 2017 is a testament to the madness that this year has been. Good madness, I must say. None of that Lovecraftian “things-man-was-never-meant-to-see” stuff. But madness anyway. And as I emerge from a cocoon fashioned out of draft chapters and reports, taking up blogging again seems like the perfect New Year’s Resolution for the month of December.

So I will start with my main takeaway from 2017: writing about the politics of development for different audiences is not an easy thing to do. I have always prided myself in being able to talk politics with almost anyone, anywhere. But writing semi-cogently is a different challenge altogether, as this year has shown me with the clarify of a punch to the face. Here are four translation tasks that I have had to deal with, and the realization that has come out of the experience. END_OF_DOCUMENT_TOKEN_TO_BE_REPLACED

In the literature that spans political science, political economy, and policy science, a large number of questions about processes of change remain unanswered, particularly about how agenda setting, decision making, and implementation occur. Thus, there is little theory to explain how issues of reform come to the attention of government decision makers or how reform of policies and institutional arrangements becomes part of their agenda. Even less is known about how policy elites weigh the often urgent and well-articulated advice they receive about policy and institutional changes, their own intellectual [p4] and political views about such changes, and economic and political pressure to alter policies, against equally pressing concerns about the impact of their decisions on existing political and bureaucratic relationships. The factors that affect whether policies will be pursued, altered, revised, or sustained after they have been decided upon are also generally left unexplored because implementation and sustainability are often considered to be matters of effective administration, not political processes.

Next week begins the first full master-level module that I am teaching at Manchester’s GDI: Policy Analysis. It is a bit of an experiment, intended to supplement the governance and politics stream with a more applied kind of course. Putting it together has been an interesting challenge, as I wanted to mix key ideas from policy sciences, political economy, organizational sociology and development studies. Despite this mad objective, I think the final result is a coherent course on the politics of the public policy process. But in putting this together I have started wondering again where it all went wrong for the study of the state and public administration.

Who are the key names in the literature about the politics of government? Max Weber was a lawyer, economist and historian who advanced sociology. Sammy Finer was a political scientist, expert on public administration and political historian. Charles Tilly, Theda Skocpol, Peter Evans – all of them sociologists who dabbled extensively in politics and history. Douglass North, economic historian and theorist who established the foundations for modern political economy. Robert Bates is a political scientist who also studied anthropology and economics.  It’s as if you cannot belong to a single discipline if you want to advance the study of the state and public policy!

And yet, 21st-century academia almost guarantees that scholars be sequestered in their ever-shrinking silos. At Manchester, traditionally the study and teaching of development has been separate from politics, economics or sociology (they even belong to different schools!), and even within development politics and governance are confined to courses separate from economics and management.  Then there’s me, putting together a course handbook spanning 4 or 5 disciplines. I must have been born 50 years too late!

Still, I am hopeful about our ability to integrate the politics of the state and public policy in the mainstream of development studies, which is after all a hybrid discipline. Perhaps in time I will find accomplices in development economics and development management who also feel a bit constrained by academic boundaries. In the meantime, I am sticking to my guns with Policy Analysis and the political study of the state, the concept with no discipline. 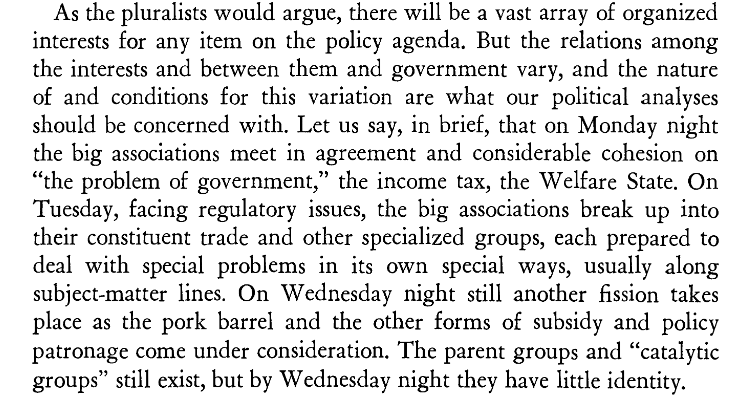 From Theodore Lowi‘s 1964 article on World Politics. Cornell for the win!