There has been some recent discussion in the Twitterverse about the “state of the nation” for Thinking and Working Politically: specifically whether TWP has already “won” or not, and whether specific tools would be a useful or self-defeating addition to the corpus. Previous posts in my PEA Confessions should make clear my view on the former: personally, I would say that rumors of TWP’s success have been greatly exaggerated. What I want to tackle now is the latter claim. In particular, I am building on a reflection by FP2P on “creating the right (empowering) tools” and a concern raised by Bruce Byiers that “tools lead people towards procedures, which then kill the idea that it is really about a process”. So what is it, then? Will tools empower TWP, or will it turn us into midless automata?

Only in the last month I have used the PDIA Toolkit twice, with actual practitioners – people untrained in the use, theory and jargon of PDIA. The first time was to help envision potential ways to get unstuck in a programming area, deconstructing the problem to find entry points and discuss the change space. The second time was during a DDD workshop in Nairobi, to demonstrate the promise and difficulty of adaptive development tools. In both instances I had little time, virtually no resources for planning, and not even the prior buy-in of participants.

The clear structure and useful prompts allowed participants to jump into the task, ensuring they did not stray down unproductive tangents, and providing a clear analytical journey from big problem to smaller problems to entry points and change space. There were questions and concerns, of course, about the need for time, for facilitation, for making sure that the focus on smaller problems did not detract from the pursuit of more ambitious goals. That is also part of the exercise. 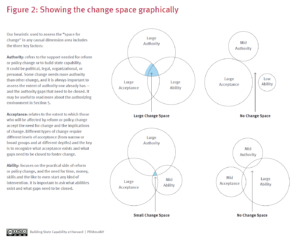 One of the tools in the PDIA toolkit that is directly relevant to Thinking and Working Politically is the “triple-A” change space analysis: a discussion of whether key stakeholders have the authority, acceptance and ability to tackle a problem. Essentially it is a barebones form of PEA, a few steps beyond stakeholdr analysis, directed at identifying potential champions, allies, spoilers, and coalitions. It is not a comprehensive PEA tool, nor is it by itself enough to substantiate a TWP process. But it was available, designed with a clear purpose, and stated in a “human readable” style.

Could the best TWP tool available be one that no TWP expert made?

In defense of models

The whole discussion about whether TWP needs tools or not reminds me of a similar argument in political science. While a sizeable part of the “how” debate in academia is about methods – experimental, quantitative, qualitative – a more fundamental debate surrounded the use of formal models to specifcy causal mechanisms.

A formal model is a precise statement of conceptual elements and relationships between them. Formal models are intrinsic to microeconomic theory, from which game theory stems. The Prisoner’s Dilemma is perhaps one of the better known models in political science, given its implications for collective action analysis. It is relatively simple: two actors, each with two available strategies, leading to four outcomes with individual payoffs. Other models can be very complex: Acemoglu & Robinson’s Economic Origins of Dictatorship and Democracy is based on a model of class relations and revolution. Crucially, formal models need not include mathematical formulae: they can also be stated textually, as demonstrated in the Analytic Narratives strand of work.

The debate around models in political science (and the humanities) has been really a debate about rational-choice theory. Opponents argue that the assumptions of rat-choice are too unrealistic, an unjustifiable simplification of social complexity. Proponents counter that one can criticize the realism or lack thereof of a formal model precisely because it is a model: everything in it is explicit, laid bare for testing and examination. In contrast, many “complex” and “nuanced” explanation are vague, rely on confounding terminology, or suffer basic logical flaws. I am not a rational-choice proponent – I’m more of a “big tent” kind of thinker – but I have always valued the transparency of formal modelers. That’s why I find Mancur Olson, Jon Elster or Margaret Levi such useful reads: they make you respond and interrogate, instead of spending too much time just trying to interpret unclear claims and unearth hidden assumptions.

But there’s another, more philosophical aspect to models: they are heuristic devices that help us simplify reality to serve a particular analytical purpose. Every theory is a model, every explanation simplifies. An explanation that was as complex as reality, in that sense, is not really an explanation – it is just a reproduction. Analytical purpose is the key nuance here. The goal of modelers is not to find truth (as in purely positivist claims), nor to find the hidden forces behind social dynamics (as in critical theory), nor to dismiss the idea that reality is knowable (as in postmodernism). It is to provide an analytical map for navigating a complex world, a goal that has accompanied social science since the very beginning. Max Weber was a great modeler, always specifying concepts and relationships as clearly as possible. That is where the notion of ideal types (e.g. patrimonialism vs rational bureaucracy) comes from: ideal types do not exist, but they provide useful poles for comparison.

Modelers simplify reality with the goal of answering particular questions. Olson’s collective action model answered why individuals may follow courses of action that were clearly suboptimal; the PDIA Toolkit’s “triple-A” model answers whether the change space for a particular policy change exists or needs to be fostered, and if so, how. When I taught policy analysis to postgraduate students in Manchester, one of the most used models in their papers was John Kingdon’s multiple-streams approach, which answers how policy entrepreneurs use policy windows to push particular policy solutions.

What tools for TWP

Is there a real risk that TWP tools will risk simplifying local context to the point of losing sight of why politics matters? Yes, absolutely. But the lack of TWP tools does nothing to prevent that same risk from materializing through the far easier mechanism of people not even trying. Models like those offered by the PDIA Toolkit simplify, but they are also falsifiable, they invite tinkering and adaptation to the needs of each team, project, or community (notice the Creative Commons license). Tools that are precise and explicit invite testing and criticism. Approaches that are vague and all-encompassing invite faith and obscurantism.

I have already written about the limitations of PEA frameworks. Perhaps it is time that the TWP community developed a more concrete set of tools that truly anyone can use, thus freeing TWP from the hands of TWP experts.