Taylor & Francis has finally released online my Third World Quarterly piece with Badru Bukenya: ‘New’ approaches confront ‘old’ challenges in African public sector reform. It has been a lengthy process between TWQ and T&F, but we are finally there. Here’s the abstract:

The disappointing performance of conventional public sector reforms in developing countries has led to the rise of ‘new’ approaches seeking to overcome traditional bureaucratic barriers to change: leadership-focused interventions like the Africa Governance Initiative (AGI); accountability-focused initiatives like the Open Government Partnership (OGP); and adaptation-focused models like those of Africa Power and Politics (APP). While these approaches are appealing to aid donors in their promise to move beyond the limitations of purely formal institution building, they fail to provide new answers to the ‘old’ analytical and practical challenges of public sector reform, in particular administrative patrimonialism, public corruption and political capture. The evidence is yet inchoate, but all points to the need for these approaches to work together with conventional ones. Beyond novel implementation tactics, however, there is a need for new strategies of sustained political support for embattled reformers who face powerful incentives against institutional change.

Scholars of comparative politics have spent decades arguing over how to classify regimes around the world. To begin with, despite what the media and political rhetoric would have us believe, there are many shades of democracy and autocracy: presidential, parliamentarian or plebiscitarian democracies; strong-man, military, or single-party autocracies, and so on. But what Huntington termed the “third wave” of democratization led to a panoply of countries worldwide that moved away from dictatorship but did not quite reach the standards of democracy. Scholars in American political science wrote about “hybrid regimes”, using such labels as”competitive authoritarianism”, “electoral authoritarianism”, “illiberal democracy” – a veritable cottage industry of typologies which some authors called “democracy with adjectives”.

A core feature with this endless typological debate is its focus on the regimes of the last 50 years or so since decolonization. If you want to learn about regimes in a historical, comparative way you have to look elsewhere, and there are hardly better elsewheres than Samuel Finer‘s massive The History of Government from the Earliest Times (1997). END_OF_DOCUMENT_TOKEN_TO_BE_REPLACED 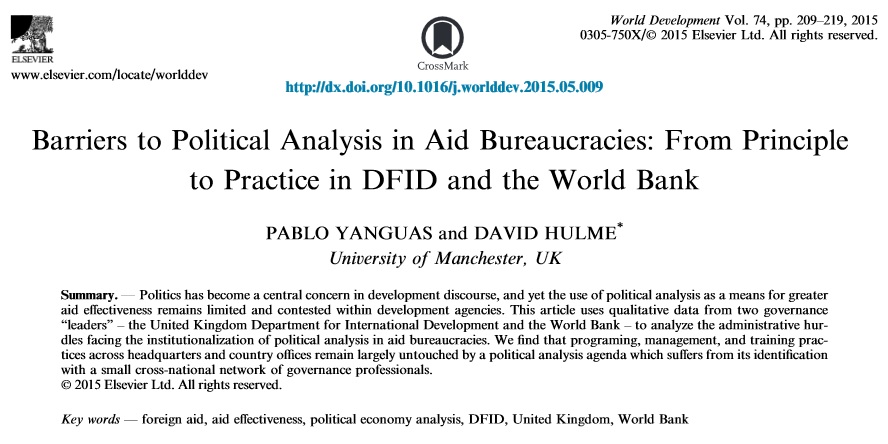 Last week I had a chance to cath up with some friends from gradschool in the US, all of them trained as political scientists. And as I expected, none of them had ever heard the term “political settlement”, which features so prominently in development debates this side of the Atlantic (to be honest, I myself first heard the term when applying for my current position in ESID). Why is the central concept in British development politics absent from American academia? And, is there a way to bridge the gap so that we stop talking past each other?

END_OF_DOCUMENT_TOKEN_TO_BE_REPLACED

“Politics matters for development”. From project officers all the way up to the heads of multilateral development agencies, from lowest-rung civil servants to cabinet ministers, everyone who has ever worked trying to enact social, economic or political change knows this basic fact. But that does not mean that they can talk openly about it, let alone plan for the eventualities of politics or set aside budgetary items for dealing with it. Aid agencies in particular seem to be trapped in a nether realm where everyone discusses the politics of development in private, but few dare to risk their careers by engaging with it in public. That is why the rise of political economy analysis (PEA) poses an interesting dilemma. The basic principle is intuitive and almost elegant in its simplicity: many projects flounder due to limited understanding of local politics, so the answer is to build more analysis into projects to ensure greater effectiveness. And yet turning this principle into practice has proven to be less than simple. END_OF_DOCUMENT_TOKEN_TO_BE_REPLACED